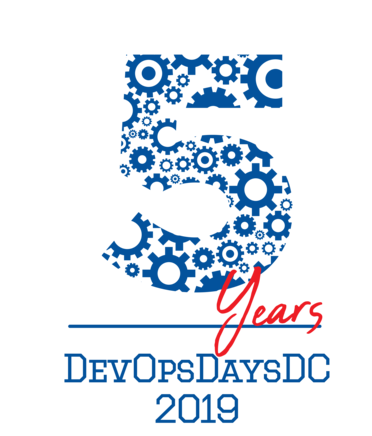 This year marks the fifth anniversary of the DevOpsDays DC chapter. This conference is held at over 187 locations all around the world. From here to Cape Town to Tel Aviv. Each location has a particular theme, and ours in DC continues the theme of supporting those around us in a politically chaotic city. In our city, we use the quote “a house divided against itself cannot stand” used by Abraham Lincoln, originating from a verse in the Bible.

I enjoy this quote because I feel that it holds true to the US Government. If a Department’s organizations are unwilling to work together then that Department ultimately fails to meet its objectives and loses the public’s trust. And while that’s my take on the quote, in our DevOpsDays DC conference we promote diversity and inclusion in ways that cannot be weaponized. Our conference brings the software development, infrastructure operations, and information security together to help not just the US Government, but also the corporations around us.

This year marks not just the anniversary but another milestone. It’s the first time we’ve held the conference in DC!

Held at the Ronald Reagan Building and International Trade Center, we were able to have more open spaces for break out sessions and the sponsors. What makes this conference unique in comparison to others is that the first part of the day are the keynote and talks, followed by break out sessions later in the afternoon. The first part of the day is a keynote, series of talks, then ignite karaoke. The karaoke is hilarious because the speakers, selected randomly, have no idea what slides they’ll be rushed to talk about. Most end up humorous. Later on, the open spaces are created, voted upon, then designated location and times for smaller, more intimate discussions of topics.

We will typically average ~500 participants, including sponsors and volunteers. Definitely not the 1500+ security conferences some of us are used to. No puns intended, but DevOpsDays is a refreshing conference because it all comes together and really runs itself. The participants aren’t intentionally malicious, and holding inside a Federal agency’s open areas assisted with on-site security personnel.

We had a very neat design for the t-shirts this year. If you look closely, you’ll see the two 🦄 designed by James. The pronoun magnets (somewhat expensive) were selected by Holly, the co-chair for our chapter. Those magnets were very popular.

Once we finished with day zero’s setup, we moved onto the speaker and organizer dinner that was held nearby. We do this to share our appreciation of fellow organizers and the speakers. We did this differently this year and scheduled for a pre fixe menu rather than a buffet. This worked out rather well because I was able to sit and eat without competing noise.

I ate two slices of cheesecake.

And, of course, a snap of the chairs, Nathen and Holly telling us how awesome we all are. They’re pretty awesome, too.

As we moved onto the start of day one and through the initial rush of registration, the event is kicked off. The stage room inside the Ronald Reagan building is built for performances and has an orchestration section. It held very well for the talks. Perfect, actually. We always have a caption and live stream. It’s part of our objective of meeting accommodations for as many as we can.

Even though that's our tag line we are in the Ronald Reagan building.

What should the tag line be?

I don’t enjoy sitting during the talks and prefer to be in the main areas mingling or swag snatching. I snapped the beginning of John Allspaw’s before heading back to the main area. Enjoy the Stranger Things references.

Back in the main area I run into many that I know. Friends of the community, friends on a regular basis, colleagues, and more. Each of the sponsors had items of interest, like three Nintendo Switch giveaways. Obviously the best giveaway is the custom print.

This is so awesome. Digital raffle going on at the @onyxpoint booth. @DevOpsDaysDC #devops pic.twitter.com/u9gWYDeMIr

The Container Commandos. An awesome revision to the previous Container Coloring Book. This version introduces podman, a new way to container.

Day one comes to an end with an evening reception. I didn’t capture much more and instead headed out early to get home and recharge. I began day two early, and do encourage reviewing the tweet storm I had posted throughout the conference. But as you can see, it is a conference for anyone who is passionate about improving not just the technology we use, but also the culture of how we interact with one another. I also encourage you to see if there is a DevOpsDays in your area. If there isn’t, start one!